Greece is a difficult place to secure a seat on a train. First you must keep your place in line at the ticket office as it drifts mysteriously to the left. Then you must plant your feet and liberally use your elbows as everyone tries to cut in front of you. And finally if you do ever make it to the counter, you have to explain what a Balkin Flexipass is to someone who is pretending that they don’t understand English. However, getting out of Athens and into the rolling country side is a worthwhile reward.

We disembarked in Lavadia and took the bus to Delphi through small mountain side villages. You can see why the Greeks thought this was the center of the world. It is breathtaking. And so was the fact that we could afford an actual hotel room with a bathroom and balcony. Ah, the view! That will stick with me for a long time.

Rebecca and I strolled through the narrow cobblestone streets, on the greatest stretch of sidewalk I’ve ever seen. Wildflowers were blooming in bright patches among the remnants of the Temple of Apollo and the Athenian Treasury, properly invoking the mystery and magic of the site.

Seriously people, the Oracle of Delphi? How cool is that? 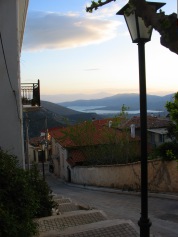