In the transportation hub of Guangzhou our trip took an unexpected turn. Here we parted ways with the girls who were homesick and Chinasick, which I understand is a common malady of travelers to the Middle Kingdom. After over two months of traveling through Asia, we spent our last evening as a traveling foursome eating the greatest eggplant in the world and noting how clever we’d become with chopsticks.

The girls headed straight for Beijing and Radek and I for Shanghai. Immediately things started to be different. As a group of two rather than four we became approachable curiosities. People came from all over the carriage to make our acquaintance and ask what we thought of China. We were shown how to write and interpret our names in Chinese, we exchanged email addresses and were escorted to a fantastic hotel in our price range that we never would have found on our own.

At 16 million, the population of Shanghai exceeds many small countries. Wherever you go you jockey for space with the swirling masses. One resident told us of the time she rode the metro and it was so crowded that her body made into the train but her hair didn’t. She had to wait until the next stop to yank it free from the automatic door. So it’s a bit intense.

Despite all of the interesting and peculiar people that surely live in a city of this magnitude, we still made an impression. It was unusal to walk 50 meters without someone yelling hello and we were often approached by young Chinese students eager to share with us the English names they had chosen for themselves. (The random approaching was not limited to foreigners, as we saw several young men forced to turn their notebooks over to police on the lookout for “bad thoughts.”)

Our greatest insight into Chinese hospitality came the next day, when we accepted a dinner invitation from a kind doctor, his son and Abigail, the woman who showed us our hotel. We ate a meal that we never would have managed to order in a restaurant that would have been too intimidatingly Chinese for us to enter. It was fantastic and our talents with chopsticks seemed to impress!

This was our first opportunity to see the curious and welcoming nature of the Chinese and it was both fascinating and exhausting. For a change of pace and space, we visited the ancient gardens and canals of Suzhou…just a half hour by freakishly fast train from the city. As one of the Chinese’s most prized touristic locations, Suzhou took the spotlight and we were thankfully demoted to only mildly interesting. 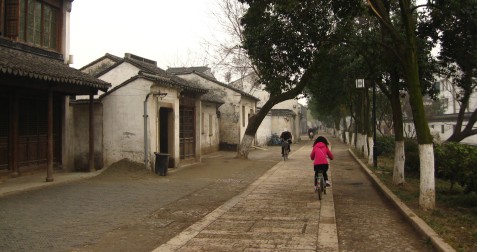