I’ll admit it. I was intimidated by the rules and regulations surrounding travel to Cuba. Two years ago I bought the guidebook and started daydreaming, but soon abandoned the plan after getting bogged down in legalese and second guesses.

I’m a rule follower. An insufferable rule follower. Like the creator of The Good Place, I think there should be a special purgatory for those who cut the line and drive in the break-down lane. Anyway, I wasn’t going to go to Cuba unless I was sure I could follow the rules. And I wasn’t sure.

And then, after careful study and consideration, one day this summer I woke up and was sure. Three hours later I had purchased round-trip tickets to Havana. (Two of those hours were spent on the phone with JetBlue after I was flagged for trying to use an American credit card while in Havana. Note, I was not in Havana, but rather Maine. Hm. Should I be deterred? This is off to a less than promising start. No! Onward to Cuba!)

To adhere to the Support for the Cuban People guidelines imposed by the US embargo on Cuba, we would need to spend most of our time in meaningful interaction with Cubans, fostering democracy, and economic independence. This law was clearly designed to pit two key layers of my personality against each other: neurotic rule-following and deep-seeded introversion.

So it was with detailed notes and receipts in hand, that we took a full day guided tour to Vinales, land of tobacco, coffee and cowboys. A fully-US-government compliant 8 hours of non-stop socializing with nowhere to hide. A long car ride with strangers and chit-chat. Plus trying to avoid riding a horse.

Me, loving a claustrophobic tour? (And Radek smoking a cigar before leading a horse-back ride?) Apparently only in Cuba. 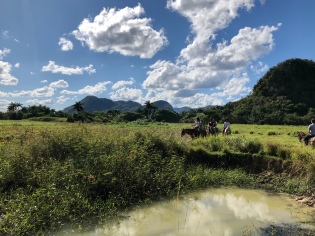